Cassapa is a system to help aiming at pool games. It uses augmented reality to help the player to adjust the cue direction. Check this video:

Everything starts with a webcam, fixed at the ceiling above the pool table. 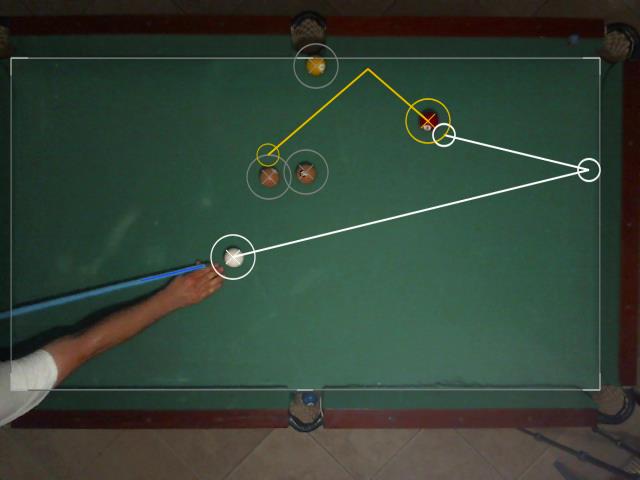 A dedicated software grabs the webcam image and uses it to detect the position of the table, balls and cue, and use this data to calculate the game physics. Then the image of the forecast play is projected over the table surface, using a video projector. This helps the player to adjust the cue before shooting.

This is a work in progress. I still have some issues to solve.

You may have noticed that some parts of the video are grainy. That happens because I'm using a really dirty cheap video projector, and it only works on very dark environments (See those blue cue lines? They should be bright green, but the projector is too weak to render them properly).
And that's a major problem, because the webcam needs a higher ambient light to capture useful images.

Besides that, the projector has a very small field-of-view, so its projected image just covered 1/3 of the table, at the best positioning. Due that, some times the cue lines disappear in parts of the video. So, the first next improvement is to get a better projector. But I've placed a video monitor beside the table, so I could shot the rest of the video without the projector. 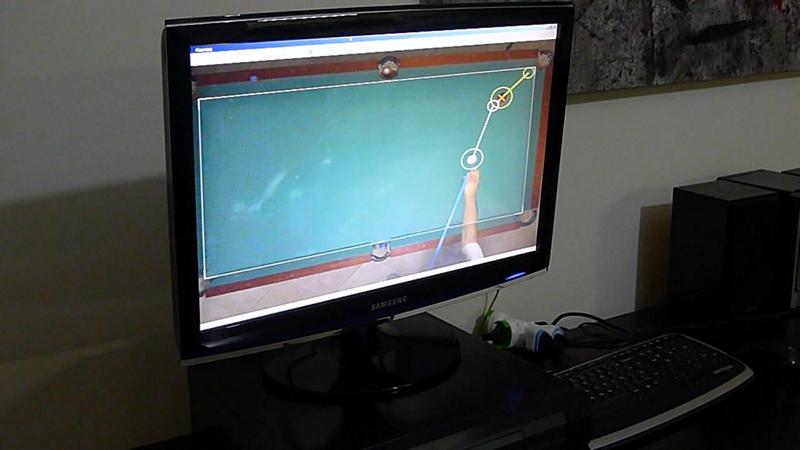 I believe that an augmented-reality glass (Like Google Glass) would provide a better interface for the player. Even a better video projector would cast some annoying shadows, would be hard to install, and also need a pain-in-the-ass calibration/warping process. Unfortunately, these glasses are still very expensive...And, If you've watched the video, I may have noticed that I also need to fix my table cloth :)

By the way, "Cassapa" it's the Portuguese word for the pool table pocket (It's actually written "caçapa").