I was getting too much distortion on my drawings on the oscilloscope. After checking that the waveform was correct, I started trying different sound-cards, and figured out they can make a huge difference on the final image.

Here is what I found about them. I tried the following sound-cards:

And here's the soundwave I used for this benchmark: 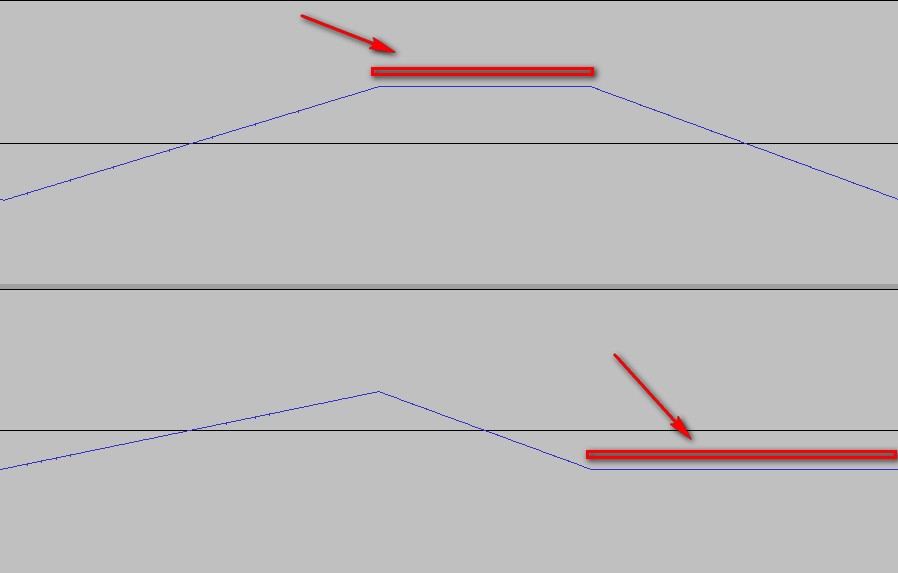 This is a simple stereo sound. The top waveform is the X axis, and the bottom one is the Y axis. When played on a stereo output connected to the oscilloscope, it should render a perfect right triangle: 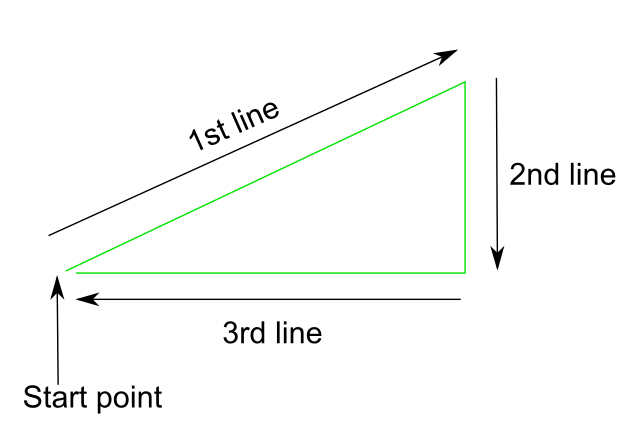 I'm taking about especially these two segments (marked by red bars): They are responsible for horizontal and vertical lines, which were the parts I had the most problems. Note, by the diagram above, that these two parts should be very steady, in order to draw perfect straight lines

The first board on test was the Realtek-based: 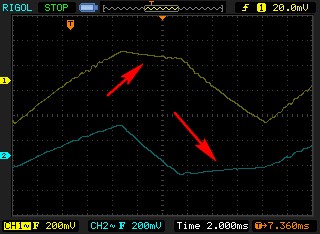 Here you can see the distortion on the two analyzed areas. In fact, this board doesn't have a good step-response (Despite this waveform having no step signal, I could check this with another waveform later, and got too much overshooting). That prevented the scope trace from being stable on either axis X or Y during drawing, then rendering the following distorted triangle: 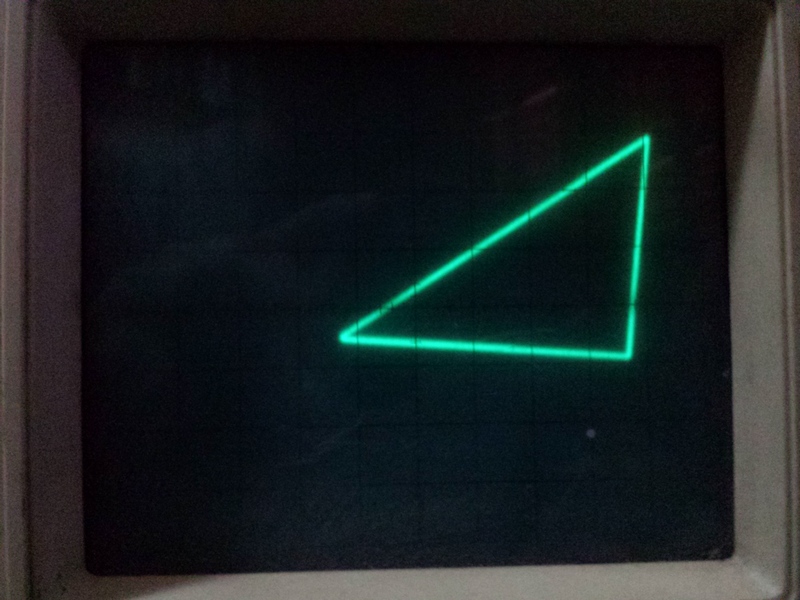 Note that the triangle is a little bit inclined. That happens because the soundboard can't manage keeping the waveform steady at the identified parts.

Then I tried a Sony headphone USB output. This is a USB-based headphone, designed for Sony Playstation, but PC-compatible. Despite being expensive, it rendered a very bad waveform 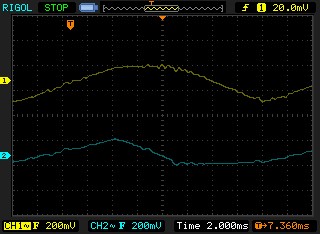 It not only didn't keep the signals steady, but it also removed the sharp parts.As expected, this rendered the worst drawing among all sound outputs I tested! 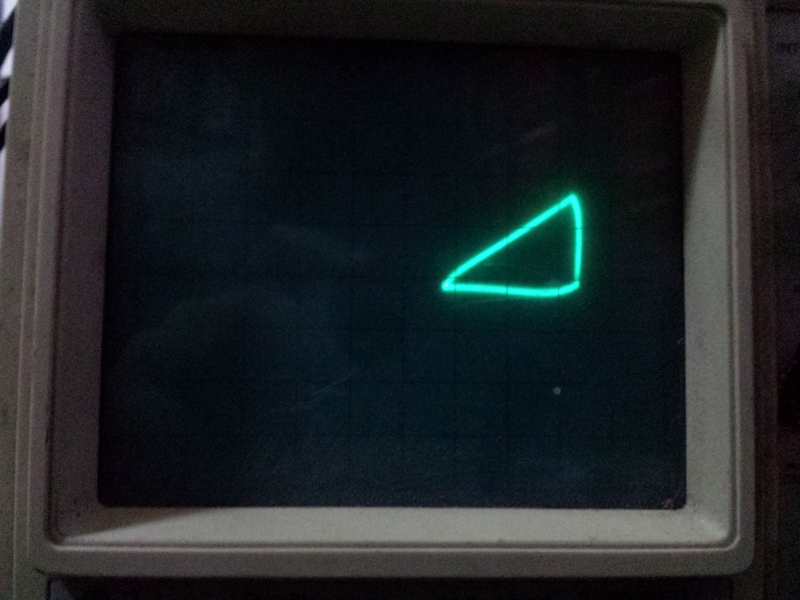 Then I tried using a phone audio output. This is what a Samsung Galaxy S4, once a top of line smartphone, did. 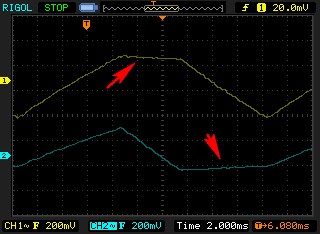 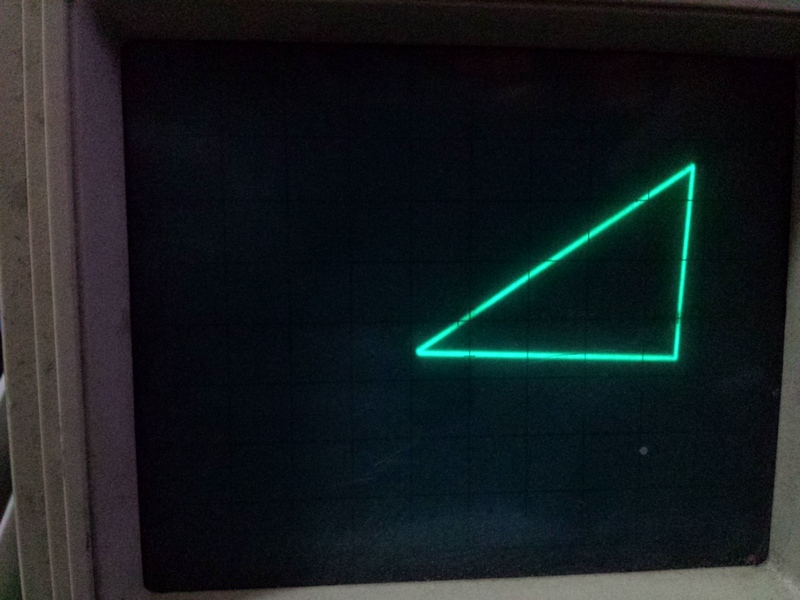 Then I found the best among all these 4 options: The Lenovo Yoga 2. This is an expensive laptop but, at lease, it has a nice audio output 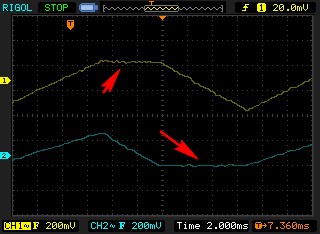 Unfortunately I've lost the photo of the oscilloscope showing the Lenovo triangle . I'll update this post if I find it again. But here's another image I got using it: 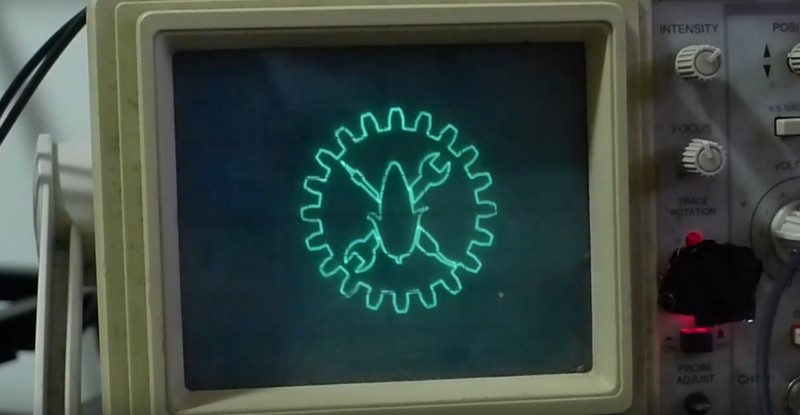 This is the logo of our local hackerspace. I could never get this image with the other sound-cards, since this image has a lot of long straight lines.

So, if you're using Rabiscoscopio and can't get a nice image output on your computer, try picking other computer or other smartphone!